Anorexia and bulimia are eating disorders. A dietary disorder is defined as the persistent avoidance of eating in order to lose weight.
Anorexia can have two clinical forms, either as a strict restrictive diet or as a diet characterised by enough food but also an intense phase of emptying the gastrointestinal system using laxatives.
Bulimia is the consumption of excessive amounts of food followed by self-induced vomiting in order not to gain weight. In some people it is difficult to distinguish whether the type of dietary disorder is anorexia or bulimia.
If over-eating and self-induced vomiting takes place more than two times a week for at least 3 months, then the person involved is considered bulimic. Anorexia usually affects adolescent women, while bulimia affects those who are 20-30 years. Both have psychological causes. Anorexia can even cause death.
As far as their impact on teeth is concerned, studies have shown palatal erosion in the teeth of people with eating disorders that cause vomiting.
Moreover, health diets that include large amounts of citrus and acidic fruit juices increase the risk of tooth erosion.

A young, female 23 year old patient was admitted to our clinic for a check-up. We immediately identified significant erosion of the palatal surfaces of the anterior teeth, which in some areas spread to the incisal lines.

We proceeded to take a detailed history from which important information was gained concerning a dietary disorder. The patient consumed a significant amount of grapefruit every day for 10 months, followed a low-calorie diet with very small meals and reported vomiting more than 4-5 times a week after consuming a slightly larger meal or causing it herself in order not to gain weight.
Her body type was normal and we tried to make clear the psychological cause and how these habits could be devastating, not only for the teeth, but for herself as well.
The important thing is that since then she has completely changed her habits. 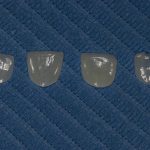 The end result satisfied the patient.

Dent4All Dental Care clinic has the ability to respond to any dental issue that concerns you with confidence because of our many years of experience.